Really, it's Great to have a Teen with Autism!

As these frustrating, challenging, and often rewarding teen years pass with Casey, I try to reflect on the "rewarding" part more than anything. You know the ol' saying, "You gotta laugh for cryin'." ? Well, I do that a lot, and along with laughing, I also try to be a glass half full kind of gal.

Call me delusional, call me unrealistic, but don't call me late for dinner! There are definite advantages and rewards to having a teen with Autism, and as hard as that is for many to believe, I think by the time you read this post, you will want to adopt one!… Ok, now I am being delusional, but hear me out. Let me just share these advantages with you!

First off
- Clothing! This is a biggie. Clothes are exceptionally important to teens, boys and girls a like. Sometimes, I see teenage guys verging on being mini metrosexuals, and it's charming and creepy at the same time! From what I hear, a certain brand of t-shirt can cost upwards of 30.00 bucks, and that's all a kid will wear! Skinny jeans only please, and of course footwear is outrageous, and must be a specific brand, or your frieds WILL disown you. 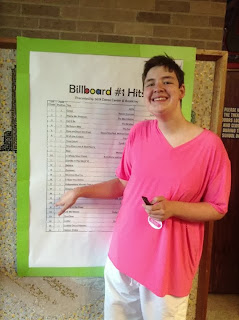 But not with Casey! I can go to Walmart and grab a stack of $7 t-shirts, and as long as there is NO TAG, he's good with them. Jeans? Who needs jeans? Well, Casey would look dashing in some, but having trouble with the button and fly kinda forces me to seek out the coolest sweats I can find. "Cool" and "sweats" dont' really go together, but I try, and you can get 'em real cheap, and Casey doesn't care! He also doesn't want his pants to hang on purpose, thats a huge bonus! My only clothing challenge is finding things appropriate for his 6'4, 240 lb frame. That's enough, fashion and trendiness be damned.

- Taking and Picking up! Not a lot of that going on at all, thank GOD! Casey has a small group of people he calls "friends". There are kids in his school I believe he considers friends, one or two imparticular he's known his whole scholastic career. One his oldest and dearest comes over after school once a week and they hang in his room playing their various devices. I hear conversation but not much, but they are happy. He doesn't ask me to take him and a group to the mall, no one is calling to have Casey over to their house so I'm not running him over to anyones and picking up. This may sound sad to you the reader, but, it is what it is, and because of it, I'm not tearing my hair out planning with other parents who's taking and whose picking up. From all accounts, this sort of activity can be a bit much, and I'm glad I don't have to deal.

- Friends in general. Would I give my left arm if Casey had some good friends to do things with? Yes! I'm not fooling myself, a normal social life is something that I quietly long for for him. But, I don't think he longs for it himself, in fact I'm sure of it. Casey is happy with he, himself, and his. DOn't get me wrong, he gets a kick out of seeing kids he knows at various events, and as mentioned, at school, but his homelife is his, and he's much more of a loner, like a lot of "typical" people I know. He doesn't get hung up on not getting invited to events, he doesn't get sad because someone didn't call him, or a friend talked to another friend about him. He doesn't care if so and so is getting together without him. He is a happy kid, and the interactions he has seem to satisfy him. I hope to promote more in the future, if he's down with it.

-Boyfriend/girlfriend stuff Aaaccckkkk So glad I don't have this to deal with, currently anyway. Although Casey does ask questions about things of a sexual nature here and there and has asked me if I was his girlfriend, thats about it. He isn't texting girls, no one is "sexting" him. No little snotty chick is cursing him for not acting a certain way to her, no one is breaking his heart, at least not right now. He just doesn't get the whole thing, and seemingly, doesn't care.

-Maturity level and innocence. Now, this may come off as the most pathetic or sad part of this post, but hear me out. How many times have parents of teens bemoaned the fact that their kids have grown up, how they miss that little kid they once had? Well, in some ways, I still can enjoy the childish innocence that seems to vaporize the moment they hit thirteen. Casey is still very immature, he still watches "Sprout", he's comfortable not being cool, he wants to sit on my lap (which ain't happening), he still needs me at night to lay with him so he can go to sleep. I still get those lovely kiddie moments, even into his teens. I know they will go away eventually, but, I get to enjoy them longer. He still calls "mommy" at fifteen. Sniff sniff… I love that!

-Hanging out. Now what I mean by "hanging out" is being with friends in situations that aren't supervised by ME! And not to say that kids are always up to no good, but they do things and they try things when you aren't around. I never have to worry about Casey calling me up from a friend's guaranteeing me their parents are home when they aren't. He isn't going to lie to me and tell me that he's going over to Fred's when he's really going over to Betty's. He won't be in that pack of kids I see at the rec center every Friday night, picking fights and doing stuff with eachother that would make their parents hair stand on end if they had hidden cameras on the walls. I always know where he is, and who he is with. Yeah, it may be sad to you, he has no "life" so to speak if this isn't happening. I tend to disagree. This is luxurious to me!

So, have I sold ya? Do you believe me when I say there are rewards and advantages to having these rascals in your home? Well, even if you aren't ready to run out and grab your own Autistic teen, at least I have mine, and I wouldn't give him up for the world!

Email ThisBlogThis!Share to TwitterShare to FacebookShare to Pinterest
Labels: teens with autism

I enjoyed reading this so much. So often in life we focus on the negative and cannot see the positive. Thanks for sharing your positive .

Bonnie, I could relate to everything you mentioned! Believe me, I often look at the advantages of Sam's sweetness and innocence (especially with his older, sassy brother in the house!)

Thanks for sharing this, Bonnie! I understand and see many of the same things with Jacob. He is "younger" in many ways and it's very sweet. Still tuck him in to bed at night and say prayers. :)

Yup, that's us too -- lots of plusses. And to be honest, the minuses are mostly related NOT to problems with Tom, but to expectations that I feel placed on me when I hear about my friends' kids' amazing adventures, terrific college admissions, etc.

The Sensory Spectrum is hosting a special blog hop of posts from bloggers in June and we'd love to have you participate! Just imagine a list of bloggers sharing their stories about what it’s like to have sensory kiddos! Read more here: http://www.thesensoryspectrum.com/sensory-bloggers-blog-hop-information/

Joining in on this blog hop will undoubtedly get your blog more exposure as people will hop from one blog to the next to read the stories. I will also be tweeting everyone's stories during the month and highlighting some on my Facebook page.

I hope you'll join us!
Jennifer @ The Sensory Spectrum
(and you can find me @ The Jenny Evolution, too!) 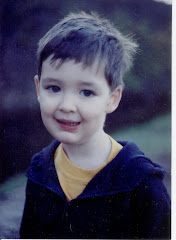 One of my favorite photos of Case, 4 years old